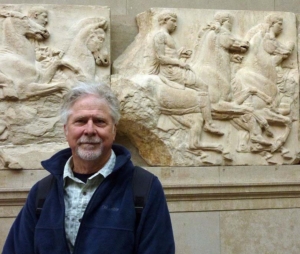 Join us 2 p.m. PT on Sunday, June 13, for an online talk for the public by historian and author Mike Vouri about the Pig War of 1859 in Washington Territory.

Long before the San Juan Islands were a vacation destination, they were the focus of an international crisis ignited by an unlikely incident: The shooting of a pig in a potato patch. This was the famous Pig War of 1859, when military and naval forces of the United States and Great Britain almost came to blows in midsummer after the death of the Berkshire boar. In the end, not a single shot was fired by opposing forces. The nations opted for peace, an outcome commemorated more than 100 years later with the creation of San Juan Island National Historical Park.

Mike Vouri is the author of five books about national, state and regional history, including The Pig War: Stand-off at Griffin Bay. Prior to his 21-year stint as chief of interpretation/historian at San Juan Island National Historical Park (retired 2015), Vouri was a public affairs officer/history curator for the Whatcom Museum of History and Art, a reporter for the Bellingham Herald and an assistant director for the Washington State Department of Veterans Affairs. He currently is a group leader and lecturer for the Skagit Valley College Road Scholar program.

Reservations for this talk will end at noon on June 13. You can sign up here on Eventbrite.

July Talk: The myth of the M1855 rifle musket: Weapons of the Coeur d’Alene...