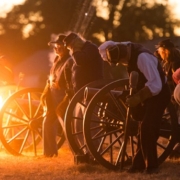 Join us for a member’s speaker series 2pm on Sunday, April 25, 2021 as Colonel (Retired) Paul R. Rosewitz, a military historian, discusses the artillery used by the regular army stationed at Fort Steilacoom and around the American West.

As the U.S. Army sought to standardize its System of Land Artillery in the 1830s, the Army quickly realized Mountain Artillery should be included in the inventory as it moved ever westward and over the various mountain ranges of the expanding United States. Col. Rosewitz will explain the development and employment of U.S. Mountain Artillery from its French origins and how its use quickly transformed from traditional mountain warfare to employment in a variety of environments in all the major conflicts from the 1830s to the 1870s and its final phased retirement in the 1890s.

Members will receive the Zoom link to the presentation prior to the event. To become a member for a reasonable donation, visit https://historicfortsteilacoom.org/membership/.

Fort Steilacoom in Lakewood occupies an important position in the history of early America and the Pacific Northwest. The fort played a significant role in the settling of Washington Territory. Beginning with its establishment in 1849 and ending with its closure in 1868, Fort Steilacoom served as a beacon of American power and promise, promoting the migration of settlers to Washington & securing American interest in the region.  Historic Fort Steilacoom Association is a non-profit organization and all donations are tax deductible.  The Historic Fort Steilacoom Association’s mission is: Sharing and preserving the first U.S. Army Post in the Puget Sound Region with area guests.

The photo of the firing Howitzer is from our sister U.S. fort, Fort Vancouver.

July Talk: The Myth of the M1855 Rifle Musket: Weapons of the Coeur d’Alene...