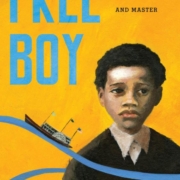 Join author Lorraine McConaghy at 2 p.m. on Sunday, Dec. 12, 2021, for an illustrated overview of the research for her book Free Boy and for a discussion of the people, events and ideas raised in the book.

Free Boy is the dual biography of Charles Mitchell, the enslaved boy who fled from Olympia in 1860, and his master James Tilton, Washington Territory’s surveyor general. In his flight from Olympia to Victoria, fugitive slave Mitchell was discovered on board the steamer Eliza Anderson at Seattle, by a U.S. Army squad from Fort Steilacoom hunting for Army deserters.

Dr. Lorraine McConaghy is a public historian who has devoted her professional life to researching and teaching Pacific Northwest history in a museum setting. She completed her doctorate in United States urban history at the University of Washington in 1993. She joined the staff of Seattle’s Museum of History & Industry in 1997 as the museum’s public historian and remained at MOHAI for more than twenty years. She is the author of Warship Under Sail, Free Boy:  A True Story of Slave and Master, New Land North of the Columbia, and a forthcoming history of metropolitan Seattle. McConaghy has continued to teach at the University of Washington and through Humanities Washington, and received many awards, including national recognition from the National Council on Public History, the Oral History Association, and the Association for State and Local History. In Washington, she has been awarded the Robert Gray medal, the highest honor given by the Washington State Historical Society.

Members of the Historic Fort Steilacoom Association will receive the Zoom link to the presentation prior to the event. Individual memberships are $15 to $20.  To become a member visit https://historicfortsteilacoom.org/membership/.

Fort Steilacoom occupies an important position in the history of early America and the Pacific Northwest. The fort played a significant role in the settling of Washington Territory. Beginning with its establishment in 1849 and ending with its closure in 1868, Fort Steilacoom served as a beacon of American power and promise, promoting the migration of settlers to Washington & securing American interest in the region.  Historic Fort Steilacoom Association is a non-profit organization and all donations are tax deductible.

The Historic Fort Steilacoom Association’s mission is: Sharing and preserving the first U.S. Army post in Puget Sound with guests. Our association acknowledges the complex history of the Fort and its role in the colonization of the area. We are actively working to incorporate the diverse perspectives and experiences of all individuals and communities who interacted with the Fort.

Life over the laundry kettles, the life of a frontier Army laundress