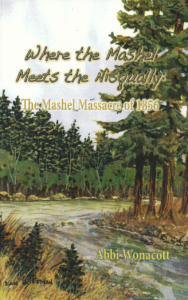 The following is from our summer 2021 newsletter, by Walter Neary. If you’d like to get our newsletter about Washington history, sign up as a member and join our community.

We’re all guilty of reducing complex matters to simple thoughts easy to grab hold of in our minds. We’re so guilty of this, you might call it an innocent act of human nature. It comes easy. For example, if you say “American Revolution” to me, I don’t first think of the web of Enlightenment philosophies, socio-economic-political dynamics of nations and internal workings of the colonies and their armies … nope, I think of George Washington crossing the Delaware River.

Consider the Puget Sound Treaty Wars, aka the Puget Sound Indian Wars. For the average citizen, if you ask about this period, they’re going to say one thing: “Fort Steilacoom.”

Er. Wait. That’s what we wish for here at the Fort, isn’t it? Actually, what the average person is going to say is, “Leschi.”

Well of course they’re going to say Leschi. His story is one of tragedy, the hero with a fatal flaw exploited by the enemy; and tragic stories go back a long ways in our culture and storytelling. He is the tragic, doomed hero whose saga plays deep strings within our souls.

If someone said, “I’m going to make a movie about the Puget Sound Treaty War,” then anyone who ever attended Washington schools and heard the story of Leschi is just naturally going to assume the movie will be about Leschi. We are enthralled by stories of the tragic hero who gives aspects of their life or all of their life to die for the cause, whether it’s Luke Skywalker or Black Widow from the Avengers.

And you could someone they should make that movie. The ‘justice’ system legally lynched Leschi, and that’s something we need to reflect on.

There is, however, one casualty in our efforts to simplify things to understand them. We miss some of the story.

So that’s a long way of saying, eight paragraphs into a book review, that one can really appreciate “Where the Mashel Meets the Nisqually: The Mashel Massacre of 1856.” I should add, by the way, there is a strong connection between the events of this book and Fort Steilacoom. You will have to read this article a bit more to find it, but I promise it’s there.

This book, by Bethel School District teacher Abbi Wonacott, illuminates an incident that should attract as much, or more attention than Leschi’s story simply because there are so many more characters: eight to 30 people died.

One challenge, of course, is that little is known in written documentation about these people. We don’t have images of them. By contrast, we know a lot about Leschi. We’ve seen his face. Lots of people reflected in writing about him and the Treaty War. The Maxon Massacre is usually referred to in passing or with a few paragraphs about the controversy.

The book of 37 pages was published by the school district in 2008, and I’ll just admit right now, I’m mean to share this review because you may have trouble finding this book for sale. However, I do know it can be reserved through the Pierce County Library System. And Wonacott does have a blog with information from the book.

The book is based on what happened when “Captain” Hamilton J. G. Maxon and nearly 60 other territorial volunteers were called by Isaac Stevens to patrol in Washington to keep an eye on the Hudson’s Bay Company employees who seemed to be getting along so suspiciously well with natives. The civilians also went looking for horse thieves, a capital offense for sure. In so doing, Maxon led his men near the confluence of the Mashel and Nisqually Rivers in the spring of 1856. The official version is that they spotted troublemakers, took fire,  and killed eight including a leader of the native army.

The Pioneer and Democrat newspaper, the party organ that Gov. Stevens hoped would be the first draft of history; wrote “Eight hostiles were killed, in all, during the excursion, three were taken prisoners, and of course the women and children were sent into the settlements unharmed”

There is a vastly different story in detailed Nisqually tribal oral tradition – that Maxon and his nearly 60 volunteers fired into and murdered children, women and elderly men. The oral tradition is extensive as to where the attacks took place, how people tried to flee, and how their bodies fell everywhere including into the water where they stayed for days. Wonacutt’s account is printed in the blog.

So suddenly we have a conflict – who do we believe? How do we decide?

Wonacutt dives deep into the motivations of the storytellers. I promised you a Fort connection – Kautz! Here’s our Augustus Kautz, who supervised construction of our surviving buildings.  He chronicled the tale, and he got it from witnesses.

“… I had visited this spot, and camped nearby with a small detachment of troops, searching for Indians who had hidden away in these forests, completely demoralized and nearly starving. A family of two or three men, and quite a number of women and children, had camped in the fork of the Mishawl and Nesqually, about two miles from this prairie, and were making fish-traps to catch salmon. When we fell in with them we learned that the Washington Territory volunteers had been before us, and with their immensely superior force had killed the most of them without regard to age or sex. Our own little command in that expedition captured about thirty of these poor, half-starved, ignorant creatures, and no act of barbarity was perpetrated by us to mar the memory of that success.”

Later on, claims of as many of 30 innocent deaths were taken up by two Anglo champions of the Nisqually, James Wickersham and Ezra Meeker. They quote an Anglo eyewitness though it’s unclear why the witness would and could have been there. But he might have been. Wonacutt goes deep in reviewing the evidence. But there’s sure plenty of evidence a massacre took place.

This book does two things, I suggest. It documents an important aspect of the Treaty War that is such an important element in the history of our Fort. And it also calls us to wonder – do we give enough attention to all the tragic aspects of the war, more than even Leschi’s compelling story?

And I suppose there’s a few more questions. Do we abandon parts of the story in our heads because they’re not news – because we think they fit into the story as just a natural, routine element?

In the Washington Historical Quarterly of January 2014, W.J. Trimble wrote candidly that bad things were done on all sides and that regrettable atrocities were committed by “bad” men. History was starting – starting – in that era to apply context to the Treaty War. Yet he shared this:

“The men who went out to find and to kill Indians who were thus damaging the communities, were not always nice men; but they often showed self-denial in leaving good-paying employments, and they endured great privations and did a necessary work for civilization.”

So you have to wonder. There’s been plenty of evidence of this massacre for awhile, yet it’s best known only in a few communities Why is this also not a tale oft told?

Is that because without a lot of details to humanize the Mashel dead, without photographs of the children  without the names of the women, was it all just part of the “necessary work for civilization?”

And if so – what does that say about civilization?

Fort Steilacoom museum reopens after being closed due to pandemic

Life over the laundry kettles, the life of a frontier Army laundress
Scroll to top